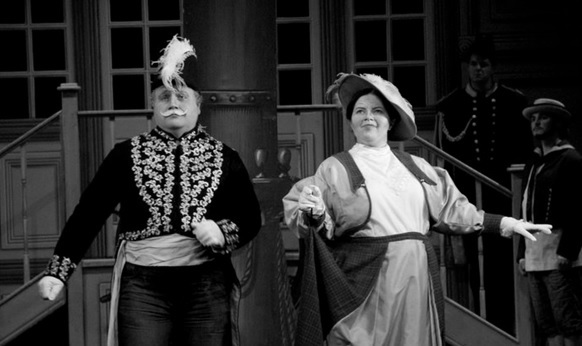 Elaine Bishop is a classically trained mezzo-soprano based in Grantham, Lincolnshire.

A recognised soloist with many local and regional societies, Elaine built a reputation as an accomplished performer with various UK and international companies at the International Gilbert and Sullivan Festival and was nominated ‘Best Character Actress’ for her role as Cousin Hebe in HMS Pinafore in 2011.

In addition, Elaine regularly performs with professional companies. In 2014, she sung the role of Eormenhild (one of the four queens of Ely) in the world premiere of Cantata Eliensis: The building of Ely Cathedral – an oratorio commissioned by Cantata Dramatica as part of the international Gravity Fields Festival. She then reprised this role in 2016 when the work was performed at Ely Cathedral. Elaine has worked on many professional Gilbert and Sullivan productions including HMS Pinafore (Raymond Gubbay Productions), Trial by Jury (Opera Minima) and Utopia (National Gilbert and Sullivan Opera Company). She has also performed with the Ellen Kent Opera Company as a singing extra in Aida and La Boheme and sung with the CLASSICfest Chorale for A Broadway Musicals Spectacular.

Alongside performing with her duo ‘Double Treble’ and two professional close harmony vocal quartets – ‘The Accidentals’ (who Elaine is the booking manager for) and the ‘Belvoir Carolling Quartet’ – Elaine regularly performs as a guest soloist with local choirs including the Belvoir Wassailers, Music in Me and the Burghley Voices. She has also performed as an alto soloist with St Wulfram’s Church Choir (Gloria, Vivaldi) and the Grantham Chorale (The Armed Man, K. Jenkins).

Alongside singing established works, Elaine has undertaken performances and recordings of new compositions in many different vocal genres. In 2014, she sung the role of Eormenhild (one of the four queens of Ely) in the world premiere of Cantata Eliensis: The building of Ely Cathedral – an oratorio commissioned by Cantata Dramatica as part of the international Gravity Fields Festival. She then reprised this role in 2016 when the work was performed at Ely Cathedral. In 2016, Elaine also worked with composer Harriet Grainger on a song for the Leeds Lieder Festival called Long Meg and her daughters (lyrics by Hilary Robinson).

Elaine also enjoys working with local musicians and songwriters and, in 2012, was approached by composer Claire Harding to record an original song for the Lincolnshire Folk Song Competition. The a-cappella song, called Down by the Brayford Side, was recorded in the studio and then performed on Radio Lincolnshire at the finals of the competition. The piece came third overall and, after the competition, Elaine returned to the studio to record a revised and updated version. Elaine also works closely with local composer Bromley Davis and lyricist John Collings – and has recorded guide vocal tracks for two new productions for them over the past few years – one pantomime and one musical called Sweetheart Memories.

For a full list of Elaine’s roles, please see the ‘repertoire’ page above.

When I compose music for songs I need a singer who can learn new songs of varying styles, sing accurately and communicate the feeling behind the lyrics.  Elaine more than amply fulfils these requirements.  She approaches the recordings professionally and nothing is too much trouble for her to get the right result.  She is my first call when I need a singer.  (Bromley Davis)

Elaine Bishop, Queen of the Fairies, had the audience thoroughly entertained with her attraction and pursuit of Private Willis….  (Grantham Journal review, Iolanthe)

The tone was most musical, projected with quality of sound and tonal graduation. The phrases were shaded and expressed with perception.  (Music Festival feedback) 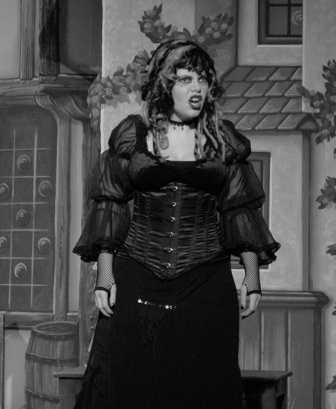